This title is schooling the world on how to make obscure industries interesting with content.

An American title is schooling the world on how to make obscure industries interesting with knock-out content. Our editor Jill Park explains her love of Modern Farmer.

Farming: not a topic you would expect the average city-loving journalist to become (slightly, ok, totally) obsessed with. Well, let me tell you, farming is THE new thing. And Modern Farmer is the brand that convinced me.

How, you ask? It was with headlines like: ‘Outlaw chickens show a chicken gym no mercy’, or another favourite: ‘Cowboy Monkey Rodeos Exist And They Are Everything You Want Them To Be’. Tell me you don’t want to read that? 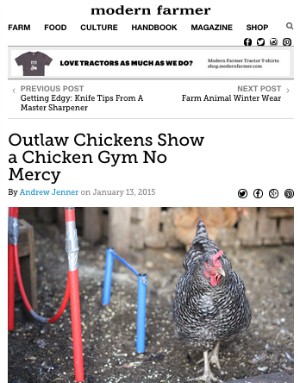 But Modern Farmer is not clickbait. Its journalists follow the age-old journalistic trick of putting people front and centre in their articles (you can read more about this clever trick here). Although, it is the animals that take centre stage on the magazine’s covers – another new obsession is the accompanying ‘cams’ whereby they livestream the cover animal. Check out the new and improved GoatCam.

It’s their newsletters that keep me hooked – in particular their subject lines. It’s hard to resist clicking on something titled the ‘Mystical chicken edition’ or the ‘Cheesemaking monk edition’ or even the ‘Baby pigs in sweaters’ (gasp!) edition. 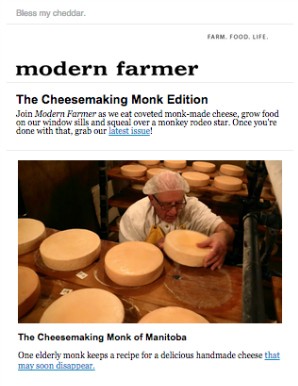 I discovered Modern Farmer after researching farming websites (don’t ask), but it seems the title has been making a name for itself in the States since its launch in 2013. Three issues in, it beat Vanity Fair, New York Magazine and GQ to win a National Magazine Award – the US magazine industry’s equivalent of an Oscar.

CEO and founder Ann Marie Gardner has a strong publishing pedigree, having previously worked as a founding editor of Monocle, the global affairs glossy.

In an interview with The New Yorker, she refers to her audience as ‘Rurbanistas’, a play on the Spanish word rurbanismo, which describes the migration from the city to countryside.

The brand’s audience could also be described as ‘dabblers’ with 61 per cent describing themselves as ‘hobby gardeners or farmers’; some 40 per cent ‘dream of owning a farm one day’. The demographics skew towards the educated and affluent and under 45.

In light of the demographic of the audience, Instagram has also proved to be a popular platform. With 14,400 followers at the time of writing, Modern Farmer has capitalised on this by regularly letting farms do Instagram takeovers, populating its feed with pictures of life on the farm that its readers can aspire to.

If you take one lesson from Modern Farmer, it’s that obscure doesn’t have to mean boring. Taking a slightly left-field approach to a traditional topic certainly got me hooked.

What I’ve learned from Modern Farmer…

Not every headline needs to be worthy of BuzzFeed. Marry the lighter stuff with the practical with ‘how-tos’ and ‘close-ups’. Don’t ‘Chandler Bing’ your content by making a joke of everything. 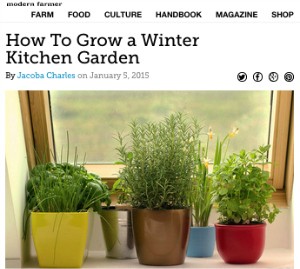 What may from the outside look like a dry subject can always be turned on its head. Find the way in that will make it relatable for your readers. A good way is to consider what about the subject grabs your attention.

Seniors and vertical farming, together at last: 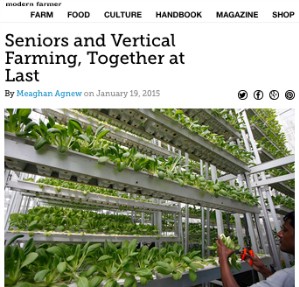 Modern Farmer conducted a detailed investigation of the tea industry in Turkey: 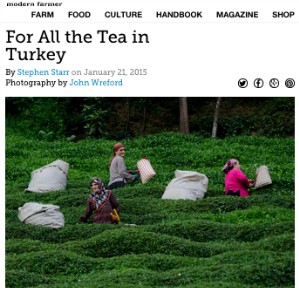 Engage your audience for help

People love to hear about people. Engage with your readers. Could they be a source of content (via Instagram takeovers, blogs, news stories, polls)? Could you capitalise on their following?

Food blogger Molly Yeh (who also blogs about living on a sugar-beet farm in Grand Forks, North Dakota) was a perfect match for Modern Farmer.